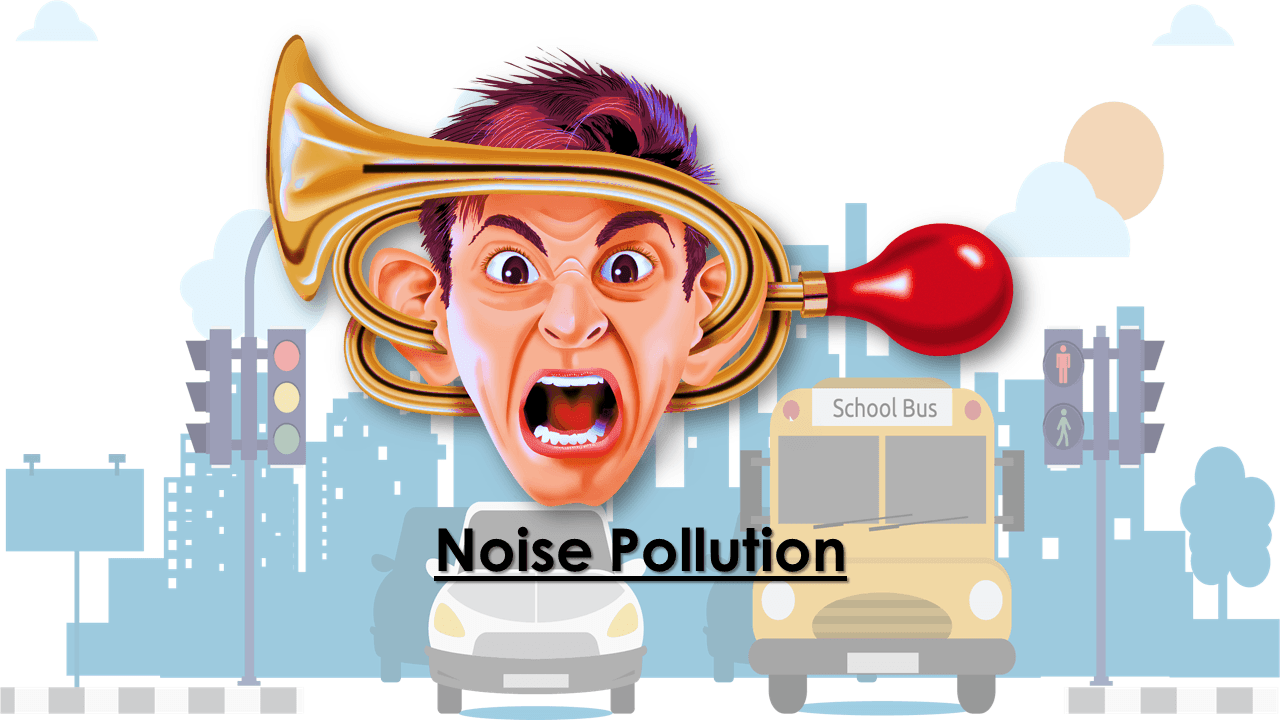 Noise Pollution can define as an unpleasant and unwanted sound. We hear various types of sound every day. Sound is mechanical energy from a vibrating source. After, Air Pollution maybe you’ll like to know about another Pollution. If yes? So, this article explains Noise Pollution, and its topics – sources, effects, and control. A type of sound may be pleasant to someone and at the same time unpleasant to others. Also, The unpleasant and unwanted sound is called noise. Sound can propagate through a medium like air, liquid, or solid.

Here is article explains the Noise Pollution and their topics; Sources, Effects, and Control.

It is expressed as a dimensionless unit, a decibel (dB). The international reference pressure of 2 x 10-5 Pa is the average threshold of hearing for a healthy ear. The decibel scale is a measure of loudness. Noise can affect the human ear because of its loudness and frequency (pitch). Also, The Central Pollution Control Board (CPCB) committee has recommended permissible noise levels for different locations as given in Table;

The main sources of noise are various modes of transportation (like air, road, rail-transportation), industrial operations, construction activities, and celebrations (social/religious functions, elections, etc) electric home appliances. Also, High levels of noise have been recorded in some of the cities of the world. In Nanjing (China) noise level of 105 dB has been recorded, while in some other cities of the world these levels are: Rome 90 dB, New York 88 dB, Calcutta 85 dB, Mumbai 82 dB, Delhi 80 dB, Kathmandu 75 dB.

Major causes/sources of noise pollution are:

These operate from workshops located on the ground floors of the residential areas and cause annoyance, discomfort, and irri­tation to the residents exposed to the noise that is inevitably produced.

For example, the situation is much better in modern planned cities like Chandigarh where the industrial area is kept away from the residential areas and both are sepa­rated from each other by a sufficiently wide green belt.

The automobile revolution in urban centers has proved to be a big source of noise pollution. Increasing traffic has given rise to traffic jams in congested areas where the repeated hooting of horns by impatient drivers pierce the ears of all road users.

The household is an industry in itself and is a source of many indoor noises such as the banging of doors, noise of playing children, crying of infants, moving of furniture, a loud conversation of the inhabitants, etc. Besides these are the entertainment equipment in the house, namely the radio, record-players, and television sets. Domestic gadgets like mixer-grinders, pressure cookers, desert coolers, air- conditioners, exhaust fans, vacuum cleaners, sewing, and washing machines are all indoor sources of noise pollution.

In India, people need only the slightest of an excuse for using loudspeakers. Also, The reason may be a religious function, birth, death, marriage, elections, dem­onstration, or just commercial advertising. The public system, therefore, contrib­utes in its way towards noise pollution.

In modern times, agriculture is highly changing in food farming. They also use modern technic or machines for farming growth. In Tractors, thrashers, harvesters, tube wells, powered tillers, etc. have all made agriculture highly mechanical but at the same time highly noisy. Noise level 90 dB to 98 dB due to the running of farm machines have been recorded in the state of Punjab.

We talk about Noise pollution, so we can not forget Defense Equipment or security level sources. Also, Defense Equipment is one of them, We have defense tools to protect the country from outside countries. In every country, they manufacture more and more defense equipment for the protection of the countrymen.

A lot of noise pollution adds to the atmosphere by artillery, tanks, launching of rockets, explosions, exercising of military airplanes, and shooting practices. Also, Screams of jet engines and sonic booms have a deafening impact on the ears and in extreme cases have been known to shatter the window panes and old dilapidated buildings.

Noise is generally harmful and a serious health hazard. It has far-reaching consequences and has many physical, physiological as well as psychological ef­fects on human beings. Extra things:

The physical manifestation of noise pollution is the effect on hearing ability. Repeated exposure to noise may result in temporary or permanent shifting of the hearing threshold of a person depending upon the level and duration of exposure.

Related Posts  What are Impact of Organizational Climate on Job Satisfaction?

The immediate and acute effect of noise pollution is the impairment of hearing (i.e. total deafness). Also, Human ears have sensory cells for hearing. If these cells are subjected to re­peated sounds of high intensity before they have an opportunity to recover fully.

They can become permanently damaged leading to impairment of hearing. In addition to sensory cells, delicate tympanic membranes or eardrums can also permanently harm by sudden loud noises such as an explosion.

Physiologica means, relating to the branch of biology that deals with the normal functions of living organisms and their parts. Also, The physiological manifestations of noise pollution are several as mentioned be­low:

How to control noise pollution? If we do something controlling noise or extra sound out there. So, what they are? The following controlling things below are;

Reduction in sources of noise:

Use of sound-absorbing silencers:

Through Law: Legislation can ensure that sound production is minimized at various social functions. Unnecessary horn blowing should restrict especially in vehicle-congested areas.