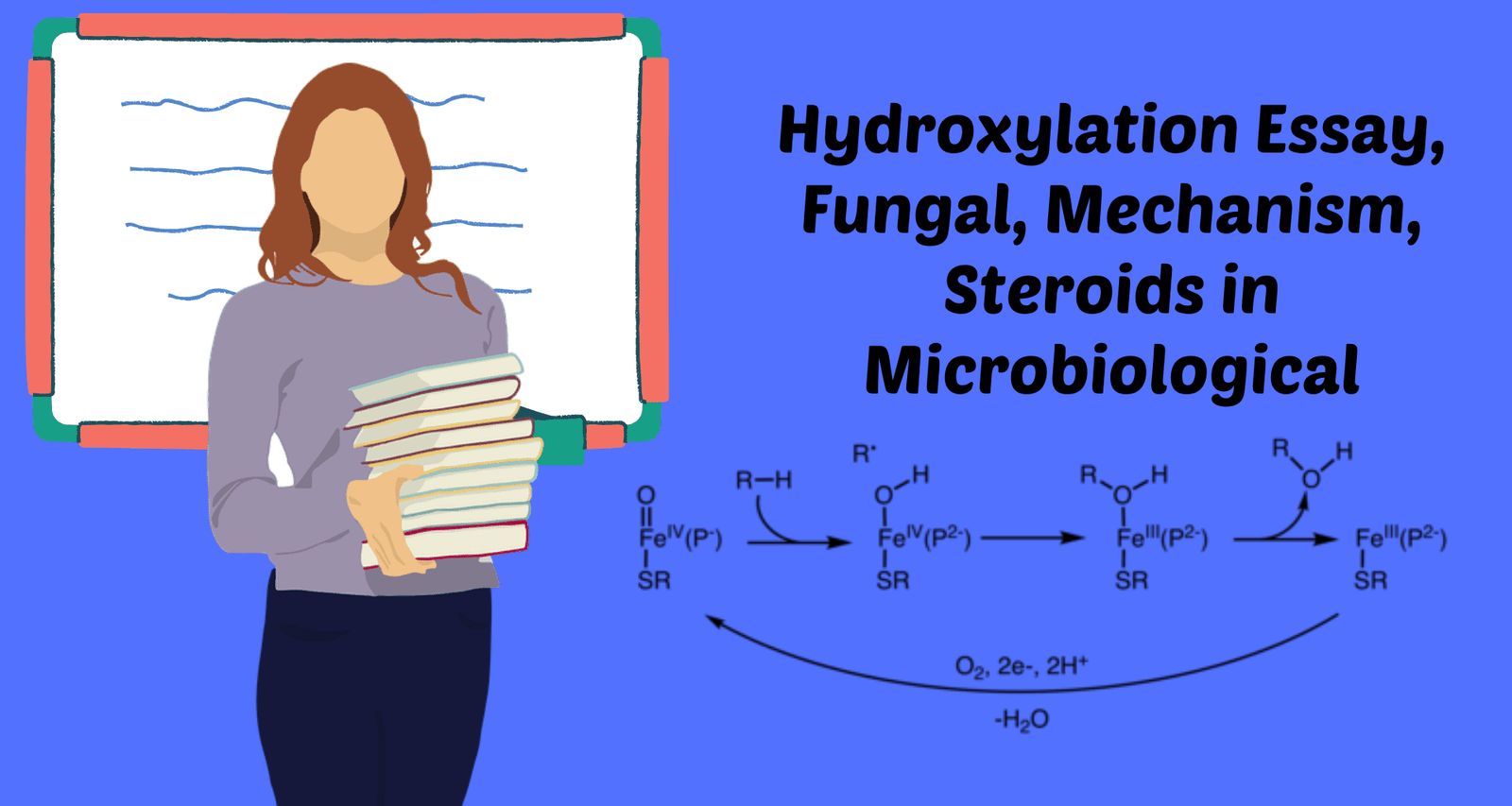 Hydroxylation in Microbiological Essay, Fungal, Mechanism, and also Steroids, discuss in there; The hydroxylation of a compound is a very important metabolic process, in humans; this process catalyzes by cytochrome P450 enzymes and results in products with higher polarity than the parent compound, and thus aiding its excretion from the body. The process of hydroxylation, involves the conversion of a carbon-hydrogen to a carbon-hydroxyl bond, and when catalyzed by the enzyme hydroxylase, the reaction is more regio- and stereospecific in contrast to the conventional chemical process. As a result, microbial hydroxylation is rather used for the synthesis of hydroxysteroids.

Here is the article to explain, Essay What is the Hydroxylation? with also understand Fungal, Mechanism, and Steroids in Microbiological!

Contents:
1. Here is the article to explain, Essay What is the Hydroxylation? with also understand Fungal, Mechanism, and Steroids in Microbiological!
1.1. Mechanism;
1.2. Model;
1.2.1. Reactions;
1.3. Hydroxylation outcome;
1.4. Hydroxylated steroids possess;

Fungal hydroxylation of steroids continues to be the focus of attention at different levels of research and product development. Despite its popularity, this process does not fully understand; because few studies have been conducted on the hydroxylase enzyme due to the difficulty in isolating this enzyme. However, most studies have shown that the cytochrome P450 enzyme is also responsible for steroid hydroxylation in filamentous fungi. Cytochrome P450 (CYP 450) enzyme is an iron-haem system that carries out a wide range of biocatalytic transformations. These enzymes are additionally recognized as monooxygenases because they transfer one atom of molecular oxygen to an organic substrate.

The catalytic mechanism for this reaction involves the binding of the substrate to the active site of the enzyme and then the displacement of a water molecule. This follows by a reduction of the iron in the CYP 450-haem complex to its ferrous state (Iron II) by an electron transfer. The ferrous state then binds to molecular oxygen to form a ferrous-deoxy (Iron (III)-OOH) species. This species then loses a hydroxyl anion to form an iron (IV)-oxygen radical. This radical may withdraw a hydrogen atom from the substrate to generate a carbon radical and an iron (IV)-hydroxyl species. The carbon radical then accepts a hydroxyl radical from the iron (IV)-hydroxyl species to form a hydroxylated product and iron (III). A simple general reaction equation for this process summarize below; (where R represents the substrate and NADPH is the electron transferring species).

In other to fully understand the mechanism of fungal hydroxylation of steroids; the relationship between the structure of the CYP 450 hydroxylase enzyme and its regio- and stereoselective characteristic has to define. However, as mentioned earlier not many studies have been carried on the structural features of this enzyme; and so ‘active site models’ did develop to grasp the concept of the Regio- and stereoselective outcome of microbial hydroxylation reactions.

The first model, postulated by Brannon et al suggest the possibility for a steroidal substrate to dress by a single steroid hydroxylase in more than one orientation due to two- sites binding; which could result in hydroxylation taking place at more than one position given the appropriate geometrical relationship between the active site of the enzyme; and the carbon atom of the substrate undergoing the reaction. These four orientations represent normal, reverse, inverted, and reverse inverted; and have been observing in the metabolic handling of 3β-hydroxy-17a-OXA-D-homo-5α-androstane-17-one by a filamentous fungus; Aspergillus tamari.

The other model, Jones’ model takes into account only the normal and reverse binding orientations. It requires the existence of three active centers on the steroid hydroxylase enzyme. These active centers have dual roles and could act both as a binding site or a hydroxylating site. However, these roles are mutually exclusive, and so hydroxylation would occur at the closest nuclear center to the steroid. Hence the enzyme-substrate interaction proposed by Jones would suggest a triangular location with an approximate spatial correspondence to C-3, C-11, and C-16 atoms of the steroid nucleus.

Related Posts  What are the different Branches of Psychology? Explain

This model could not explain the hydroxylation reactions by some microorganisms. Therefore another theory did develop by McCrindle et al using both models above; and taking into account the 3- D nature of the steroid compound and hydroxylase enzyme. In this model, the steroid ring acts as a planar reference point. Binding site A favors oxygen atoms below the plane of the ring and hydroxylation is alpha. Binding site B is similar to A but can also be hydroxylated alpha (axial or equatorial) or beta (equatorial) atoms. Whereas, binding site C binds preferentially to oxygen atoms above the plane of the steroid ring and hydroxylate with -beta orientation. Overall, this model tends to fit the hydroxylation pattern of most microorganisms.

The hydroxylation outcome of some steroids can predict based on the oxygen functions or ‘directing groups’ on the steroid skeleton. As a rule of thumb mono- oxygenated substrates are dihydroxylation and their transformation products are often in low yields. This is a result of the presence of one oxygen function on the steroid compound making it less polar; and, thus decreasing its solubility which hinders its permeation into the microbial cell. In addition to this, the presence of only one oxygen function allows the steroid to bind to the enzyme at only one center; thereby increasing its rotation and oscillation about the active site which makes it more likely to be hydroxylation.

Whereas, di- oxygenated substrates are mono-hydroxylated; because the presence of two oxygen functions reduces the chance of multiple hydroxylations due to the reduction in the possible number of binding orientations. Furthermore, the presence of two binding oxygen groups increases the rate of reactivity of microbiological transformation as the increased substrate polarity improves solubility; and thus permeation into the cell membrane of the microorganism is very likely. A wide variety of organisms have shown this pattern of hydroxylation with a wide range of substrates.

Related Posts  Speed Car Accidents: What You Need to Know

SScience
The characteristics of the Troposphere: The atmosphere has a multi-layered structure consisting of the following basic layers. Troposphere,…
SScience
What is the Troposphere? It is the lowest portion of Earth’s atmosphere and is also where nearly all…

SScience
Data Science has become a progressive innovation that everybody appears to discuss. Hailed as the “hottest occupation of…