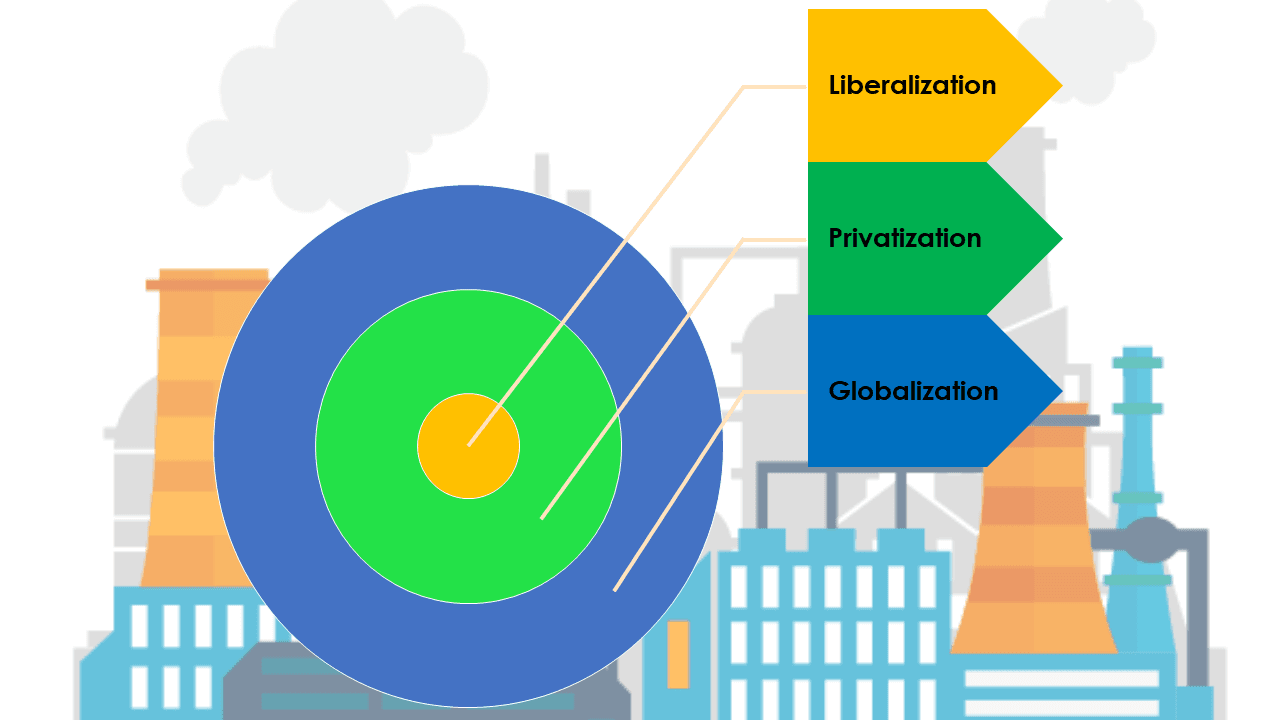 What is Economic Environment? The totality of economic factors, such as employment, income, inflation, interest rates, productivity, and wealth, that influence the buying behavior of consumers and institutions. This article we have a discussion on Economic Environment and their parts; liberalization, privatization, and globalization. Economic environment refers to all those economic factors which have a bearing on the functioning of a business unit.

Economic Environment discusses the questions of What do liberalization, privatization, and globalization of the Indian Economy mean? Better Explanation.

Contents:
1. Economic Environment discusses the questions of What do liberalization, privatization, and globalization of the Indian Economy mean? Better Explanation.
1.1. Extra Things:
1.2. The main objectives of India’s development plan are:
1.2.1. The broad features of this policy are as follows:
1.3. Liberalization:
1.3.1. Abolition of Industrial Licensing and Registration:
1.3.2. The concession from the Monopolies Act:
1.3.3. Freedom for Expansion and Production to Industries:
1.3.4. Increase in the Investment Limit of the Small Industries:
1.3.5. Freedom to import Capital Goods:
1.4. Privatization:
1.4.1. Contraction of the Public Sector:
1.5. Globalization:
1.5.1. Increase in Foreign Investment:
1.5.2. Devaluation:
1.5.3. Reduction in tariffs:
1.5.4. Export Promotion:
1.5.5. The rupee made Convertible:

To solve the economic problems of our country, the government took several steps including control by the State of certain industries, central planning and reduced importance of the private sector. Besides people, markets require purchasing power and that depends upon current income, savings, prices, debt and credit facilities, etc. The economic environment affects the demand structure of any industry or product. The following factors should always keep in mind by the business people to determine the success of the business.

Each of the above factors can pose an opportunity as well as a threat to a firm. For example, in a developing economy, the low demand for the product is due to the low-income level of the people. In such a situation a firm or company can not generate the purchasing power of the people to generate the demand for the products. But it can develop a low priced product to suit the low-income market otherwise it will slip out from the market.

Similarly, the industry gets several incentives and support from the government if it comes under the purview of the priority sector whereas some industries face a tough task if they are regarding as inessential ones. In the industry life cycle, timing is everything when it comes to making good cycle-sensitive decisions.

What is the Internationalization? Meaning Definition Advantages

The managers need to make appropriate cutbacks before the onslaught of recession because at that time sales are bound to decline which leads to increasing inventories and idle resources and that is a costly situation.

On the other hand, business people cannot afford to get caught short during a period of rapid expansion. This is where accurate economic forecasts are a necessity and therefore, a manager must pay careful attention to the major economic changes.

The main objectives of India’s development plan are:

As a part of economic reforms, the Government of India announced a new industrial policy in July 1991.

The broad features of this policy are as follows:

They are three things liberalization, privatization, and globalization. The following features of the economics below are;

Liberalization of the economy means to free it from direct or physical controls impose by the government. Before 1991, the government had imposing several types of controls on the Indian economy, e.g., industrial licensing system; price control or financial control on goods, import license, foreign exchange control, restrictions on investment by big business houses, etc. these had to dampen the enthusiasm of the entrepreneurs to establish new industries.

These controls had given rise to corruption, undue delays, and inefficiency. Economic reforms, therefore, made a bid to reduce restrictions impose on the economy. Also, Economic reforms were based on the assumption that market forces could guide the economy more effectively than government control.

Following measures have been taking under economic reforms for liberalization of Indian economy:

Abolition of Industrial Licensing and Registration:

The New Industrial Policy (NIP) is the first part of the liberalization measures. Under the NIP, industrial licensing has been greatly liberalizing. All industries, except a few specified ones, have been de-licensing under the NIP and liberated from the clutches of control in a bid to eliminate the obstacles to industrial growth. De-licensing of passenger car industry, bulk drugs industry, consumer electronics industry, etc. became landmarks and several new players entered these industries.

Industries for which licenses are still necessary are:

Small Scale Industry (SSI) de-reservation, however, has not made much progress.

The concession from the Monopolies Act:

According to the provisions of Monopolies and Restrictive Trade Practices Act (MRTP Act) all those companies having assets worth more than 100 crores used to declare MRTP firms and were subject to several restrictions. Now the concept of MRTP has been done away with. These firms are now no longer require to obtain prior approval of the government, at the time of making investment decisions.

Freedom for Expansion and Production to Industries:

As a result of the liberalization policy, industries have been giving the following freedom:

Increase in the Investment Limit of the Small Industries:

Under the policy of liberalization. Indian industries will be free to buy machines and raw materials from abroad to expand and modernize themselves.

Following measures were adopted in respect of privatization under economic reforms:

Contraction of the Public Sector:

The number of industries exclusively reserved for the public sector was reduced from 17 to 4. The Government has been divesting its stake in public sector undertakings in the light of the redefinition of its role from being a provider of goods and services to that of a policy-maker and facilitator. Between 1991-2002 the Government has privatized assets worth US$ 6.3 billion.

It means integrating the economy of a country with the economies of other countries under conditions of freer flow of trade and capital and movement of persons across borders.

Main components of Globalization of the Indian economy are as under:

To promote exports under the policy of globalization, the Indian rupee was devaluing. In July 1991, the rupee was devaluing to the extent of 20 percent on average. The objective was an export promotion, import substitution and attraction of foreign capital.

To render the Indian economy beneficial internationally, custom duties and tariff impose on imports and exports are reducing gradually.

Several measures have been taking to meet the deficit of the balance of payments. Exports have been promoting. Special facilities like the abolition of export duties, cheaper export credit and cuts in import duty have been providing to the exports to increase the share of Indian exports in world trade. The government also enhance the duty drawback in respect of a large number of items. The greater flow of bank finance to the export sector at a concessional rate also enhances the competitiveness of exports.

The rupee made Convertible:

The government brought in partial convertibility of the rupee in 1992-93 and full convertibility on the trading account in 1993-94. The move supported the intention to give the exchange rate mechanism its due role in regulating the trade flow. It also serves to encourage exports.