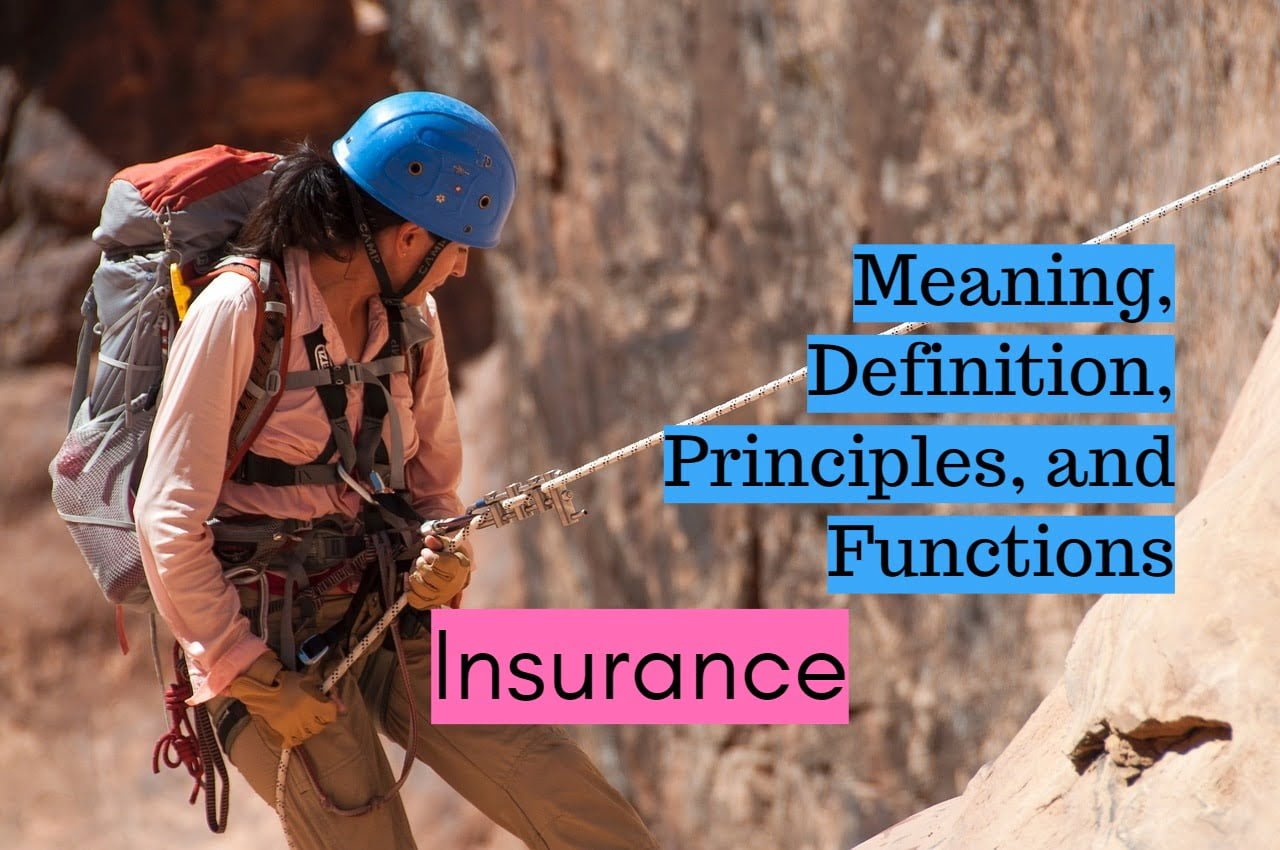 Meaning: Life is a roller coaster ride and is full of twist and turn. The insurance policy is a protection against the uncertainties of life. Insurance is defined as a cooperative tool which is meant to spread the damage caused by a particular risk, which comes in contact with it and who agrees to insure themselves against that risk. As in all insurance, the insured person pays the premium in risk, transfer, and exchange to the insurer. Do you study to learn: If Yes? Then read the lot. Let’s Study: Meaning, Definition, Principles, and Functions of Insurance. Read this in the Hindi language: अर्थ, परिभाषा, सिद्धांत, और बीमा के कार्य।

The concept of Insurance Discussing the topic: Meaning, Definition, Principles, and Functions of Insurance.

These risks are such that they can not be known in advance when they win and provision for them against any person is physically impossible. In the case of risk life insurance assumed by the insurer, there is the risk of death of the insured. Insurance policies cover the risk of life as well as other assets and valuables such as home, automobile, ornaments etc.

How do you understand insurance? Meaning.

Insurance is a system through which some people are harmed, who are aware of many risks. With the help of insurance, a large number of people aware of similar risks contribute to a common fund, in which it is good to face losses by some unfortunate people due to unfortunate incidents.

Insurance is a protection against financial loss arising out of an unexpected event. The insurance policy not only helps in reducing risk but also provides financial cushions against unfavorable financial burdens. Insurance is defined as a cooperative tool which is meant to spread the damage caused by a particular risk, which comes in contact with it and who agrees to insure themselves against that risk.

The risk is the uncertainty of financial loss. Insurance is also defined as a social tool to deposit the money in order to meet the risk of uncertain loss through a certain risk for the injured person against the risk. Insurance provides financial protection against the loss arising from an indefinite event.

One person can take advantage of this protection by paying the premium to the insurance company. Generally, a pool is created through contributions made by those wishing to save from common risk. In the case of indeterminate incidence from this pool, any damage to the insured is paid.

Life insurance has come a long way from earlier days when it was originally considered as a risk-cover medium from time to time, which included temporary risk situations like ocean voyages. Since life insurance became more established, it was felt that this was a useful tool for many situations, including temporary needs, hazards, savings, investment, retirement etc.

Related Posts  How to Creating an Entrepreneurial Culture?

Insurance is a contract between two parties, so that a party agrees to take risk in exchange for ideas that go in the form of premium and to any other party in the event of an indefinite event (death) or termination of a certain term in the case of life insurance After compensating for the latter or the other party, any other party is promised to pay a certain amount. In the case of general insurance, there is an uncertain event. The risk side is known as ‘insurer’ or ‘assurance’ and the party whose risk is covered is known as ‘insured’ or ‘assured’.

The definition of insurance can be seen from two viewpoints:

Insurance is a co-operative device of distributing losses, falling on an individual or his family over a large number of persons each bearing a nominal expenditure and feeling secure against heavy loss. Insurance is a co-operative device to spread the loss caused by a particular risk over a number of persons, who are exposed to it and who agree to insure themselves against the risk.

Thus, the insurance is;

Similarly, another definition can be given. Insurance is a co-operative device of distributing losses, falling on an individual or his family over a large number of persons, each bearing a nominal expenditure and feeling secure against heavy loss.

Insurance may be defined as a contract consisting of one party (the insurer) who agrees to pay to other parties (the insured) or his beneficiary, a certain sum upon a given contingency against which insurance is sought. Insurance has been defined to be that in which a sum of money as a premium is paid in consideration of the insurance incurring the risk of paying a large sum upon a given contingency.

The insurance, thus, is a contract whereby:

The more specific definition can be given as follows,

So it is clear that every risk involves the loss of one or the other kind. The function of insurance is to spread this loss over a large number of persons through the mechanism of co-operation.

The important Principles of Insurance:

The main motive of insurance is cooperation. Insurance is defined as the equitable transfer of risk of loss from one entity to another, in exchange for a premium.

Insurance is based upon two basic principles:

Insurance is a co-operative device. If one person is providing for his own losses, it cannot be strictly insurance because in insurance the loss is shared by a group of persons who are willing to co-operate.

The loss in the form of premium can be distributed only on the basis of the theory of probability. The chances of loss are estimated in advance to affix the amount of premium. Since the degree of loss depends upon various factors, the affecting factors are analyzed before determining the amount of loss.

With the help of this principle, the uncertainty of loss is converted into certainty. The insurer will not have to suffer loss as well as the gain windfall. Therefore, the insurer has to charge only so much of amount which is adequate to meet the losses.

The insurance, on the basis of past experience, present conditions and future prospects, fixes the amount of premium. Without premium, no co-operation is possible and the premium cannot be calculated without the help of the theory of probability, and consequently, no insurance is possible.

The important principle of insurance are as follows:

Under this insurance contract, both the parties should have faith over each other. As a client, it is the duty of the insured to disclose all the facts to the insurance company. Any fraud or misrepresentation of facts can result into the cancellation of the contract.

This is a regulatory principle. This principle is observed more strictly in property insurance than in life insurance. The purpose of this principle is to set back the insured to the same financial position that existed before the loss or damage occurred.

Double insurance denotes insurance of same subject matter with two different companies or with the same company under two different policies. Insurance is possible in case of indemnity contracts like fire, marine and property insurance. The double insurance policy is adopted where the financial position of the insurer is doubtful. The insured cannot recover more than the actual loss and cannot claim the whole amount from both the insurers.

The primary functions of insurance include the following:

The secondary functions of insurance include the following:

In past years, tariff associations or mutual fire insurance associations were found to share the loss at a cheaper rate. In order to function successfully, the insurance should be joined by a large number of persons. Insurance is a form of risk management primarily used to hedge against the risk of potential financial loss. Again insurance is defined as the equitable transfers of the risk of a potential loss, from one entity to another, in exchange for a premium and duty of care. Read this in the Hindi language: अर्थ, परिभाषा, सिद्धांत, और बीमा के कार्य।

IInsurance
4 Life Insurance Types of Coverage, Advantages, Disadvantages, and Explained Finance Essay; This insurance is one of the…
IInsurance
Learn, Explain What is an Insurance? Meaning and Definition!  Insurance is a means of protection from financial loss. It…