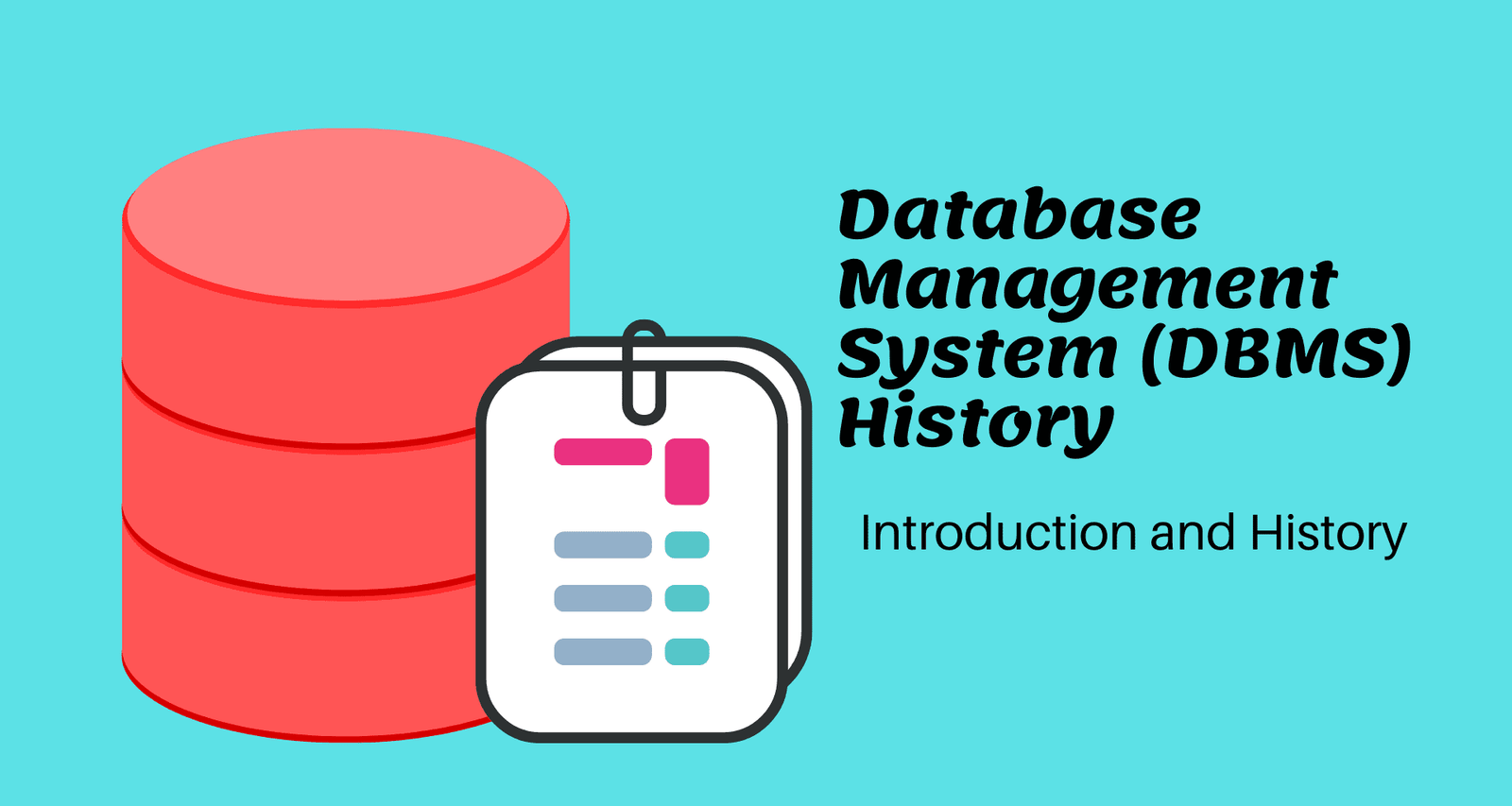 What is the History of Database Management System (DBMS)? It is a computer software program that stands designed as the means of managing all databases that exist currently installed on a system hard drive or network. Different types of database management systems exist, with some of them designed for the oversight and proper control of databases that exist configured for specific purposes. Here are some examples of the various incarnations of DBMS technology that are currently in use, and some of the basic elements that are part of DBMS software applications. Data is a collection of facts and figures. The data collection was increasing day today and also they needed to store it in a device or software which is safer.

Here is the article to explain, Database Management System (DBMS) Introduction and their History!

What is DBMS? Database Management System (DBMS) is software for storing and retrieving users’ data while considering appropriate security measures. It consists of a group of programs that manipulate the database. The DBMS accepts the request for data from an application and instructs the operating system to provide the specific data. In large systems, a DBMS helps users and other third-party software to store and retrieve data. Also, DBMS allows users to create their databases as per their requirements. The term “DBMS” includes the use of the database and other application programs. It provides an interface between the data and the software application.

A Database Management System (DBMS) is a set of computer programs that controls the creation, maintenance, and use of a database. It allows organizations to place control of database development in the hands of database administrators (DBAs) and other specialists. Also, DBMS is a system software package that helps the use of the integrated collection of data records and files known as databases. It allows different user application programs to easily access the same database. DBMSs may use any of a variety of database models, such as the network model or relational model. In large systems, a DBMS allows users and other software to store and retrieve data in a structured way.

Related Posts  How to Explain the Different types of Data Mining Model?

Instead of having to write computer programs to extract information, users can ask simple questions in a query language. Thus, many DBMS packages provide Fourth-generation programming language (4GLs) and other application development features. It helps to specify the logical organization for a database and access and use the information within a database. It provides facilities for controlling data access, enforcing data integrity, managing concurrency, and restoring the database from backups. A DBMS also provides the ability to logically present database information to users.

Here, are the important landmarks from history:

Charles Bachman was the first person to develop the Integrated Data Store (IDS); which existed based on a network data model for which he existed inaugurated with the Turing Award (The most prestigious award; which is equivalent to the Nobel prize in the field of Computer Science.). It existed developed in the early 1960s. In the late 1960s, IBM (International Business Machines Corporation) developed the Integrated Management Systems; which is the standard database system used to date in many places. Also, It stood developed based on the hierarchical database model.

It was during the year 1970 that the relational database model existed developed by Edgar Codd. Also, Many of the database models we use today are relationally based. It stood considered the standardized database model from then. The relational model was still in use by many people in the market. Later during the same decade (1980’s), IBM developed the Structured Query Language (SQL) as a part of the R project. It stood declared as a standard language for the queries by ISO and ANSI.

The Transaction Management Systems for processing transactions stood also developed by James Gray for which he has felicitated the Turing Award. Further, there were many other models with rich features like complex queries, datatypes to insert images, and many others. The Internet Age has perhaps influenced the data models much more. Data models stood developed using object-oriented programming features, embedding with scripting languages like HyperText Markup Language (HTML) for queries. With humongous data being available online, DBMS is gaining more significance day by day.

Related Posts  What does Artificial Intelligence (AI) mean? PPT with Components of Robot

Databases have been in use since the earliest days of electronic computing. Unlike modern systems which can be applied to widely different databases and needs, the vast majority of older systems were tightly linked to the custom; databases to gain speed at the expense of flexibility. Originally DBMSs were found only in large organizations with the computer hardware needed to support large data sets. Some types of DBMS are:

As computers grew in speed and capability, several general-purpose database systems emerged; by the mid-1960s there were several such systems in commercial use. Interest in a standard began to grow, and Charles Bachman, the author of one such product, Integrated Data Store (IDS), founded the “Database Task Group” within CODASYL, the group responsible for the creation and standardization of COBOL. In 1971 they delivered their standard, which generally became known as the “Codasyl approach”, and soon there were several commercial products based on it available.

Edgar Codd worked at IBM in San Jose, California, in one of their offshoot offices that were primarily involved in the development of hard disk systems. He was unhappy with the navigational model of the Codasyl approach, notably the lack of a “search” facility. In 1970, he wrote several papers that outlined a new approach to database construction that eventually culminated in the groundbreaking A Relational Model of Data for Large Shared Data Banks.

In this paper, he described a new system for storing and also working with large databases. Instead of records being stored in some sort of linked list of free-form records as in Codasyl, Codd’s idea was to use a “table” of fixed-length records. A linked-list system would be very inefficient when storing “sparse” databases where some of the data for anyone’s record could be left empty. The relational model solved this by splitting the data into a series of normalized tables, with optional elements being moved out of the main table to where they would take up room only if needed.

Some differences between DBMSs;

SQL (Structured query language) is a database computer language designed for managing data in relational database management systems (RDBMS) and originally based upon relational algebra. Its scope includes data insert, query, update and delete, schema creation and modification, and data access control. SQL was one of the first languages for Edgar F. Codd’s relational model in his influential 1970 paper, “A Relational Model of Data for Large Shared Data Banks” and became the most widely used language for relational databases.

PHP (hypertext Preprocessor) provides a range of facilities to allow web database developers to retrieve data from a database and merge this dynamic content with static content on a web page. It includes the actual database(where the data are stored)and the DBMS, which manages all the access to the database, the application server manages communication with the database server with the DBMS API.

Oracle DBMS Oracle database systemââ‚¬ ”identified by an alphanumeric system identifier or SID ââ‚¬ ”comprises at least one instance of the application, along with data storage. An instanceââ‚¬ ”identified persistently by an instantiation number comprises a set of operating-system processes and memory structures that interact with the storage. In addition to storage, the database consists of online redo logs (or logs), which hold transactional history. Processes can in turn archive the online redo logs into archive logs (offline redo logs), which provide the basis (if necessary) for data recovery and some forms of data replication.

The Oracle DBMS can store and execute stored procedures and functions within itself. PL/SQL (Oracle Corporation’s proprietary procedural extension to SQL), or the object-oriented language Java can invoke such code objects and/or provide the programming structures for writing them. Also, DBMS stands for Database Management System which is a general term for a set of software dedicated to controlling the storage of data.

RDMBS stands for Relational Database Management System. This is the most common form of DBMS. Invented by E.F. Codd, the only way to view the data is as a set of tables. Because there can be relationships between the tables, people often assume that is what the word “relational” means. Not so. Codd was a mathematician and the word “relational” is a mathematical term from the science of set theory. It means, roughly, “based on tables.

What is the Executive Information System (EIS)?

So how do Glasgow Home Cleaning Services Work?