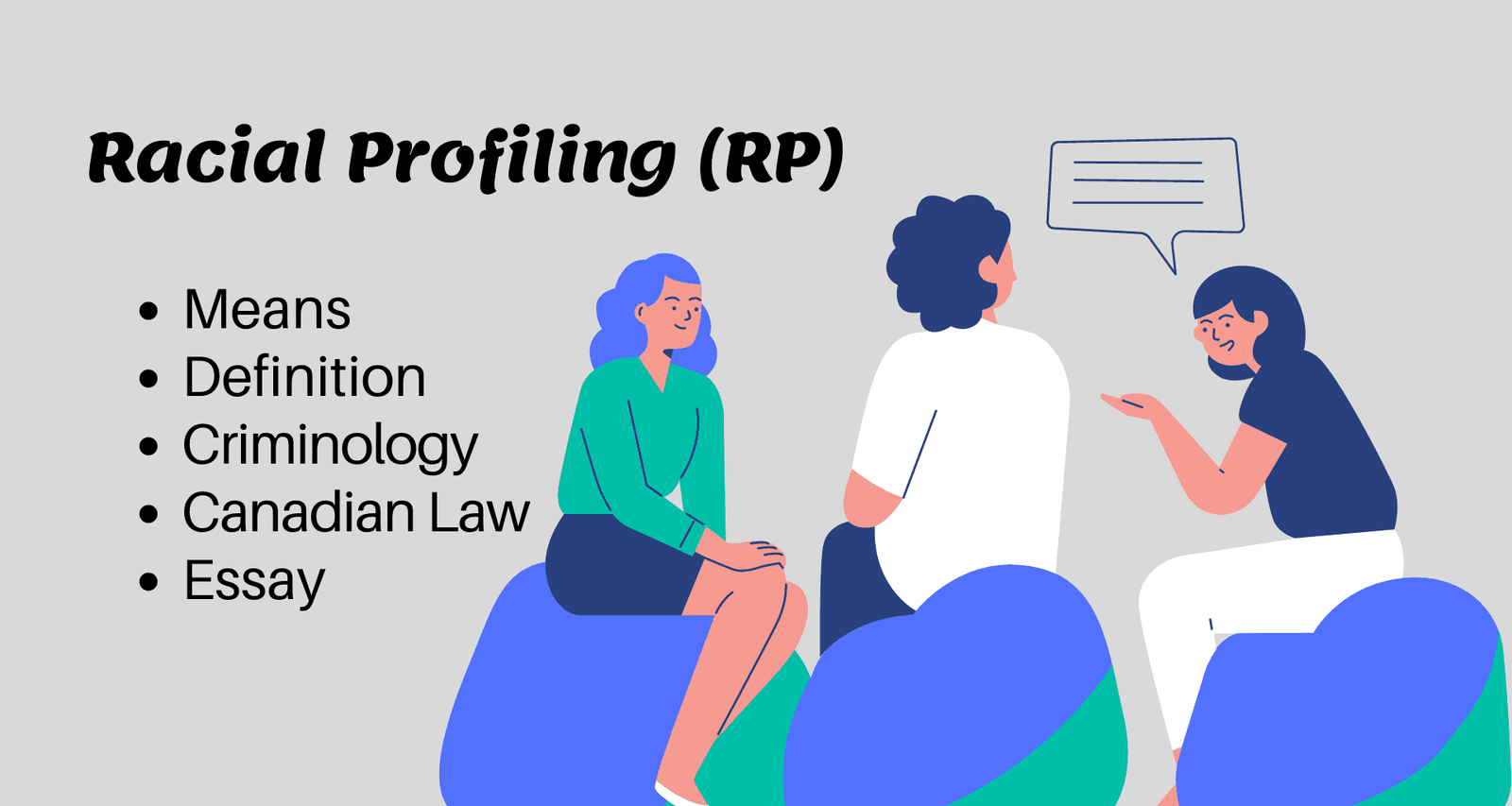 What the Means of Racial Profiling? The Essay of Canadian Law in Criminology; The concern about RP is erupting throughout the country. Many provinces, cities, and social activist groups have decided to study racial profiling, or how race and ethnicity may play a part in police investigations. Toronto is no different. Allegations of racial profiling (RP) have been around for years and still are a subject that creates a lot of media hype and controversy surrounding police.

Here is the article to explain, What does Means of Racial Profiling? The Essay of Canadian Law in Criminology!

They should not mix in with criminal profiling, because they are two different things. It is not specific to one race or one country. Being racially profiled can happen to anyone no matter what race or gender or what country they live in. In Toronto, there have been numerous newspaper and television articles accusing the Toronto Police Service of systemic racism and racial profiling. Along with the media articles, there have existed complaints filed to the Ontario Human Rights Commission accusing the Toronto Police Service and its’ members of racial profiling.

Naturally, the race is what makes allegations of RP by the Toronto Police Service; so controversial and, at least at the level of public rhetoric, so condemned. But it is important to rethink RP through the lens of criminal profiling and to reduce race to the role; that it is purportedly playing in racial profiling, namely a predictive factor; to treat race no differently than we would gender, class, age, or any other profile that works; to take the focus away from race and place it on criminal profiling more generally. Rethinking RP through the lens of criminal profiling sheds light on police practices. This paper will examine the allegations of racial profiling against the Toronto Police Service to prove; that the Service does not systematically racially profile instead they systematically criminally profile.

To examine RP and criminally profiling one must understand the differences between the two. Although there is no clear definition of RP, there is a common component in all of the definitions. This paper will define them as the practice of targeting racial minorities for criminal investigation solely or, in part, based on their skin color. For example, a male black is driving down the expressway in a brand new red Ferrari obeying all laws. Police observed the male and stop him just because of the color of his skin.

According to the Harvard Latino Law Review, criminal profiling involves; “the use of racial or ethnic characteristics by police departments in stopping an individual; because his or her description matches that of an actual suspect. In this sense, race functions as the equivalent of hair color or height; which can then exist used in combination with other factors to paint a more accurate portrait of a suspected criminal. As a result, generalized notions of criminal propensity exist not projected onto an individual; because of that person’s membership in a particular racial or ethnic group”. For example, using the previous example of the male black driving the red Ferrari, police stop the male; because he is driving in the general area of the incident. His vehicle matches the description given by the witness, along with his gender and skin color.

The Toronto Star newspaper articles used empirical data collected from the Toronto Police Service’s CIPS database. According to the newspaper articles it examined 480,000 files contained within the database, relating to arrest and traffic stops; and concluded that “Blacks arrested by Toronto Police stand treated more harshly than white…”, and “a disproportionate number of black motorists exist ticketed for violations that only surface following a traffic stop. This difference, says civil libertarians, community leaders, and criminologists, suggest police use racial profiling in deciding whom to pull over”.

On June 18th, 2009 The Human Rights Tribunal of Ontario handed down a decision on a case involving members of the Toronto Police Service and a black Canada Post letter carrier. In the tribunals’ decision, they concluded that Ron Phipps existed racially profiled by white police. The adjudicator wrote in her submission“I find that Michael Shaw did discriminate against the applicant on March 9, 2005, in the provision of police services based on color, contrary to section 1 and 9 of the Code”.

The non-uses of race-based statistics by the Toronto Police Service exist also another argument used by groups to support their claims. They argue that the ” One fears that the only reason the Police Board refuses to release this data is to ensure that the public does not get updated information on racial profiling”.

Examining the Toronto Star article as a police officer;

There are errors in their conclusions. The Toronto Star compiled its’ data using the files contained in the CIPS database. This database ONLY contained files relating to arrests and tickets issued to persons. The problem using only this database is that it does not take into account the number of persons; the police had investigated where there was no arrest or ticket issued. This would distort the true number of persons stopped by police, which would affect Toronto Star’s conclusions; either enforcing their claims of systemic racial profiling by the Toronto Police Service or disproving it.

The Ontario Human Rights Commission uses the following definition of RP; “any action undertaken for reasons of safety, security or public protection, that relies on stereotypes about race, color, ethnicity, ancestry, religion, or place of origin, or a combination of these, rather than on a reasonable suspicion, to single out an individual for greater scrutiny or different treatment”. The Ontario Human Rights Commission’s definition exists broader compared to the definition used in the courts; “the practice of targeting racial minorities for criminal investigation solely or, in part, based on their skin color”.

This Ontario Human Rights Commission broad definition of RP does not allow the factor of race to play any part in a police officer’s decision. This means that no matter what if police use race as a factor; then he is racially profiling according to the Commission’s definition. In the Ontario Human Rights Tribunal decision where Ron Phipps filed a complaint of RP against members of the Toronto Police Service, the adjudicator said; “In this case, as in many cases alleging racial discrimination; there is no direct evidence that race was a factor in the officer’s decision to take the actions that he did”.

Even with this statement, the adjudicator found the member of the Toronto Police Service guilty saying; “I find that Michael Shaw did discriminate against the applicant on March 9, 2005”. The adjudicator used circumstantial evidence in her decision of quilt but should have used clear defined evidence. According to Chief Blair of the Toronto Police Service, the ruling created “an impossibly high standard”; and, “you can have the best of intentions and be total without bias; but, none of that matters if someone wants to believe you exist biased”.

In the recent Ontario Progressive Conservative leadership campaign; Tim Hudak and Randy Hillier both members of the Ontario Parliament called for the overhaul of the Ontario Human Rights Tribunal. They claimed the current system is dysfunctional and called for an evidence-based system one similar to the family court system instead of a system that is based on “hurt feelings”.

In response to the allegations of RP based on the non-publications of race-based statistics, They do not refer to the act of a law enforcement agent pursuing a suspect in which the specific description of the suspect includes race or ethnicity in combination with other identifying factors The term “racial profiling” has existed used loosely and lacks a universally accepted definition Wortley argues for more research and more data collection by police forces, saying the refusal to deal with it will “ensure that the issue of racial discrimination continues to haunt law enforcement agencies for decades to come.”

Historically, it has stood accepted and appreciated that law enforcement officers exist authorized to legally and effectively take actions to prevent crime, maintain order, and enforce the law. In this regard, law enforcement has always possessed the granted authority to exercise discretion in crime interdiction of which criminal profiling contributes to such decisions. Over time, however, some proactive police practices that included certain types of profiling have existed viewed more critically than others.

The concept of criminal profiling;

The concept of criminal profiling was first introduced into traditional law enforcement to assist in criminal investigations during the latter part of the 20th century. Criminologists and psychologists provided the methods of profiling to law enforcement to help connect victims, witnesses, and especially perpetrators to the criminal activity. The criminal profiles contributed to solving crimes and preventing the occurrence of future criminal offenses.

In general terms, criminal profiling existed defined as the practice of describing an individual; who had committed a particular criminal act; thereby equipping law enforcement officers with investigative mechanisms and information leading to the apprehension of the offender. The criminal analysis often consisted of physical characteristics, behavioral perspective, behavioral classifications, and social or criminal associations. It was and continues to be an acceptable law enforcement practice although scholars caution; that general criminal profiling is not suitable for all crimes; and, must not exist used as a substitute for better investigation strategies.

Definition and Essay on Federal System of Government

How to define the Consideration in Contract Law?