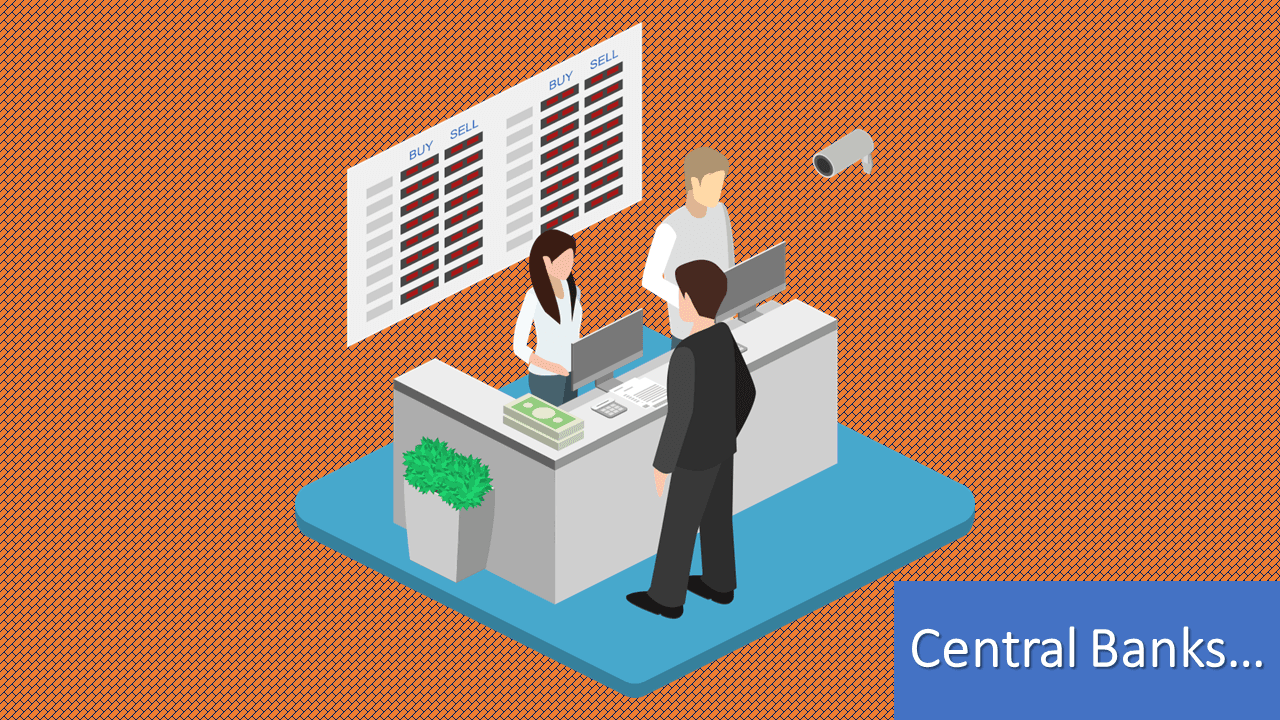 A central bank, institution, such as the Bank of England, the U.S. Federal Reserve System, or the Bank of Japan, that charges with regulating the size of a nation’s money supply, the availability, and cost of credit, and the foreign-exchange value of its currency. This article explains the Concept of Central Banks: Meaning, Objectives, Role, Operations, and Autonomy. Regulation of the availability and cost of credit may be non-selective or may design to influence the distribution of credit among competing uses.

The objectives of the central bank include economic growth in line with the economy’s potential to expand; a high level of employment; stable prices (that is, stability in the purchasing power of money); and moderate long-term interest rates.

The central bank is ultimately concerned with preserving the integrity of a country’s financial institutions, combating inflation, defending the exchange rate of the country’s currency and preventing excessive unemployment.

Indeed the central bank’s influents spread not only within the domestic territory of a country but even, through financial and trade linkages — to virtually every corner of the globe.

The central bank’s main goal is low and stable inflation.

It also seeks to promote steady growth in national output, low unemployment, and orderly financial markets. If the output is growing rapidly and inflation is rising the central bank is likely to raise interest rates, as this puts a brake on the economy and reduces inflationary pressures.

If the economy is sluggish and business is languishing, an exactly opposite type of monetary action calls for. The central bank will lower interest rates — which is likely to boost aggregate demand, increase output and reduce unemployment.

Through 5 steps, how the central bank affects economic activity. (1) is the change in reserves, which leads to changes in M, in (2); leading to (3), changes in interest rates and credit availability. In (4) AD change’s in response to investment and other interest-sensitive components of desired expenditure.

In (5) changes in output, employment and general price level follow. (It should not, however, miss that fiscal policy also affects aggregate demand).

The central bank has at its disposal several policy instruments. These can affect certain intermediate targets. These instruments are directed towards achieving the ultimate objectives of monetary policy — low inflation, rapid growth in output and low unemployment which are the signs of a healthy economy. For the sake of analysis, it is important to keep the different groups (policy instruments, intermediate targets, and ultimate objectives) separate and distinct.

In managing money, the central bank must keep its eye on a set of variables known as intermediate targets. These are economic variables that are intermediate in the transmission mechanism between monetary policy instruments and ultimate policy goals. When the central bank seeks to affect its ultimate objectives, it first changes one of its instruments, such as the discount rate.

This change affects an intermediate variable such as interest rates, credit availability or the money supply. For maintaining sound health of the economy the central bank keeps a close watch on its intermediate targets. Ultimately monetary and fiscal policies are partners in pursuing the measure objectives of rapid growth, low unemployment, and stable prices.

The autonomy of the Central Banks:

In recent years there is a strong demand for central bank independence. Monetary policy independence is not necessary primarily in order to protect a ‘conservative’ central banker from the influence that a less ‘conservative’ government might seek to bring to bear, but rather to enable central bankers with a longer-term decision horizon (and/or a lower rate of time preference) to assert their authority when faced with a government with a shorter planning “horizon (and/or a higher rate of time preference).

Then, when the government ‘by a conscious act relinquishes its power’, it does not mean that the institution to which the power of decision-making transfers has different inflation and employment prefer­ences from the population, but simply that it is operating with a longer time horizon than the government.

Thus, the central bank may react appropriately to temporary output shocks if it thinks that such a policy can pursue without long-term disadvantages for price stability. From this standpoint, the economic rationale for indepen­dence is that it enables those deciding monetary policy to conduct their policy without being always scrutinized by the government for short-term results.

The longer-term horizon in their decision-making implies that they make full allowance for the long-time lags involved in the conduct of monetary policy, i.e., its formulation and implementation.

It is now felt that the most important aim of central bank legislation should be to create an incentive structure that guarantees a long-term time horizon of central bankers. As most politicians are characterized by rather myopic behavior, this implies, above all, that the monetary policy decisions taken in the central bank have to insulate from the general political process as far as possible.

This explains why central bank independence is now widely regarded as a prerequisite for an effective monetary policy. The trick is to attain the appropriate balance between the need to be responsive to short-term pressures and the need to ensure that those pressures are exerted in a system that safeguards the long-term interest of the population. However, there are different definitions of central bank independence.

Any institutional feature that enhances the central bank’s capacity to pursue this goal will increase central bank independence. Economic independence means that a central bank has unlimited freedom to determine all monetary policy transactions that lead to changes in its operating targets.

The different notions of independence:

Since all these definitions have both merits and shortcomings it is necessary to make a synthesis of both approaches, which distinguishes three different notions of independence.

The European Central Bank grants a somewhat more limited degree of goal independence. Similar arrangements are found in Japan and, to some extent, in Sweden.

The most important prediction of both theoretical and empirical kinds of literature is that a central bank should have instrument independence, but should not have goal independence.

There are no permanent trade-offs between price stability and other macroeconomic targets. Therefore, there is no real choice that ‘elected officials’ could make for the population in the long run. In the short-term, supply shocks make it necessary to allow for deviations from a medium-term inflation target. But entrusting the government or the parliament with this decision could lead to the risk of an inflation bias.

This leads to a possible trade-off between:

Instrument independence implies that a central bank can set its operating targets without any interference from the government.

In most countries, monetary policy can autonomously determine interest rates. However, as in the case of goal independence, there are countries where the government can still override the central bank’s decisions.

As far as the control over the exchange rate is concerned, there is at present no central bank that has unlimited responsibility for this target of monetary policy. Only the ECB makes a distinction between formal exchange arrangements and a policy of managed floating.

The central banks in all other countries have very limited responsibilities in the field of exchange rate policy. All central bank acts assign this responsibility’ without qualifications to the government.

The third element of instrument independence concerns the explicit limitations for central bank lending to the government. This relates exclusively to direct lending to the public sector. It is, therefore, perfectly compatible with the EC Treaty.

By purchasing government bonds from the commercial banks as part of its open-market policy a central bank can easily bypass the prohibition on deficit financing and conduct its money market management essentially on outright open-market operations.

In other central bank acts, no similar regulations can find. However, it is ‘conceivable that a monetary policy geared to price stability might guarantee simply by giving a politically independent central bank the power to decide of its own accord when and how much to lend to public sector borrowers’.

But then there is always the danger of a central bank giving in to political pressure and thus promoting inflationary financing of government-expenditure.

Even if central bankers are granted instrument and/or goal independence, the government could try to exert some informal pressure on monetary policy. For instance, if the central bank governor could dismiss at any time, and without specific reasons at the discretion of the government, he or she would be in a rather weak position vis-a-vis the minister of finance or the head of the government.

A strong informal influence on the central bank can also be exerted if only one person, i.e., the governor, is in charge of monetary policy decisions. In this case, it is sufficient that the government sends a depicted partisan to the top of the central bank.

To sum up, there is an inherent inflation bias mainly due to a short-term time horizon of politicians. This calls for central bank legislation that provides central bankers with independence from politicians and with long-terms of office, which is a very efficient means of insulating central bankers from the government.

The Relationship between Central and Commercial Banks!

BBanking Content
Development banks are those which have been set up mainly to provide infrastructure facilities for the industrial growth…
BBanking Content
Commercial Banks: Banks have developed around 200 years ago. The nature of banks has changed as time has…
BBanking Content
The RBI (Reserve Bank of India) is the apex financial institution of the country’s financial system entrusted with the…