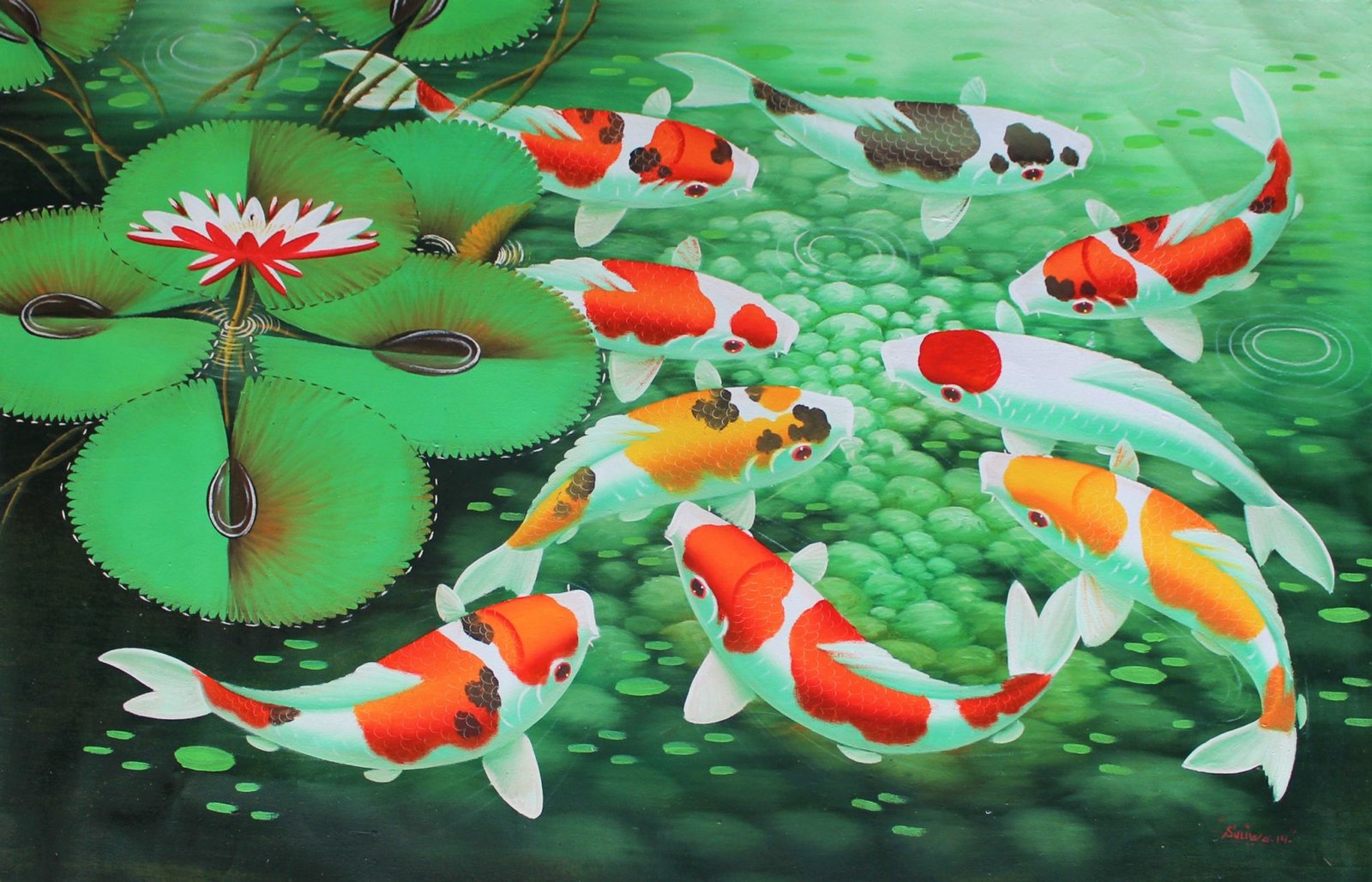 A SUMMER morning. The air is still; there is no sound but the churring of a grasshopper on the river bank, and somewhere the timid cooing of a turtle-dove. Feathery clouds stand motionless in the sky, looking like snow scattered about. . . . Gerassim, the carpenter, a tall gaunt peasant, with a curly red head and a face overgrown with hair, is floundering about in the water under the green willow branches near an unfinished bathing shed. . . . He puffs and pants and, blinking furiously, is trying to get hold of something under the roots of the willows. His face is covered with perspiration. A couple of yards from him, Lubim, the carpenter, a young hunchback with a triangular face and narrow Chinese-looking eyes, is standing up to his neck in water. Both Gerassim and Lubim are in shirts and linen breeches. Both are blue with cold, for they have been more than an hour already in the water.

“But why do you keep poking with your hand?” cries the hunchback Lubim, shivering as though in a fever. “You blockhead! Hold him, hold him, or else he’ll get away, the anathema! Hold him, I tell you!”

“He won’t get away. . . . Where can he get to? He’s under a root,” says Gerassim in a hoarse, hollow bass, which seems to come not from his throat, but from the depths of his stomach. “He’s slippery, the beggar, and there’s nothing to catch hold of.”

“Catch hold!” Gerassim mimics him. “You’re a fine one to give orders. . . . You’d better come and catch hold of him yourself, you hunchback devil. . . . What are you standing there for?”

“I would catch hold of him if it were possible. But can I stand by the bank, and me as short as I am? It’s deep there.”

The hunchback waves his arms, swims up to Gerassim, and catches hold of the twigs. At the first attempt to stand up, he goes into the water over his head and begins blowing up bubbles.

“I told you it was deep,” he says, rolling his eyes angrily. “Am I to sit on your neck or what?”

“Stand on a root . . . there are a lot of roots like a ladder.” The hunchback gropes for a root with his heel, and tightly gripping several twigs, stands on it. . . . Having got his balance, and established himself in his new position, he bends down, and trying not to get the water into his mouth, begins fumbling with his right hand among the roots. Getting entangled among the weeds and slipping on the mossy roots he finds his hand in contact with the sharp pincers of a crayfish.

“As though we wanted to see you, you demon!” says Lubim, and he angrily flings the crayfish on the bank.

At last his hand feels Gerassim’ s arm, and groping its way along it comes to something cold and slimy.

The hunchback puffs out his cheeks, holds his breath, opens his eyes wide, and apparently has already got his fingers in the gills, but at that moment the twigs to which he is holding on with his left hand break, and losing his balance he plops into the water! Eddies race away from the bank as though frightened, and little bubbles come up from the spot where he has fallen in. The hunchback swims out and, snorting, clutches at the twigs.

“You’ll be drowned next, you stupid, and I shall have to answer for you,” wheezes Gerassim.” Clamber out, the devil take you! I’ll get him out myself.”

High words follow. . . . The sun is baking hot. The shadows begin to grow shorter and to draw in on themselves, like the horns of a snail. . . . The high grass warmed by the sun begins to give out a strong, heavy smell of honey. It will soon be midday, and Gerassim and Lubim are still floundering under the willow tree. The husky bass and the shrill, frozen tenor persistently disturb the stillness of the summer day.

“Pull him out by the gills, pull him out! Stay, I’ll push him out! Where are you shoving your great ugly fist? Poke him with your finger — you pig’s face! Get round by the side! get to the left, to the left, there’s a big hole on the right! You’ll be a supper for the water-devil! Pull it by the lip!”

There is the sound of the flick of a whip. . . . A herd of cattle, driven by Yefim, the shepherd, saunter lazily down the sloping bank to drink. The shepherd, a decrepit old man, with one eye and a crooked mouth, walks with his head bowed, looking at his feet. The first to reach the water are the sheep, then come the horses, and last of all the cows.

“Push him from below!” he hears Lubim’s voice. “Stick your finger in! Are you deaf, fellow, or what? Tfoo!”

“What are you after, lads?” shouts Yefim.

“An eel-pout! We can’t get him out! He’s hidden under the roots. Get round to the side! To the side!”

For a minute Yefim screws up his eye at the fishermen, then he takes off his bark shoes, throws his sack off his shoulders, and takes off his shirt. He has not the patience to take off his breeches, but, making the sign of the cross, he steps into the water, holding out his thin dark arms to balance himself. . . . For fifty paces he walks along the slimy bottom, then he takes to swimming.

“Wait a minute, lads!” he shouts. “Wait! Don’t be in a hurry to pull him out, you’ll lose him. You must do it properly!”

Yefim joins the carpenters and all three, shoving each other with their knees and their elbows, puffing and swearing at one another, bustle about the same spot. Lubim, the hunchback, gets a mouthful of water, and the air rings with his hard spasmodic coughing.

“Where’s the shepherd?” comes a shout from the bank. “Yefim! Shepherd! Where are you? The cattle are in the garden! Drive them out, drive them out of the garden! Where is he, the old brigand?”

First men’s voices are heard, then a woman’s. The master himself, Andrey Andreitch, wearing a dressing-gown made of a Persian shawl and carrying a newspaper in his hand, appears from behind the garden fence. He looks inquiringly towards the shouts which come from the river, and then trips rapidly towards the bathing shed.

“What’s this? Who’s shouting?” he asks sternly, seeing through the branches of the willow the three wet heads of the fishermen. “What are you so busy about there?”

“Catching a fish,” mutters Yefim, without raising his head.

“I’ll give it to you! The beasts are in the garden and he is fishing! . . . When will that bathing shed be done, you devils? You’ve been at work two days, and what is there to show for it?”

“An eel-pout?” says the master, and his eyes begin to glisten. “Get him out quickly then.”

What is the Cash Budget? Meaning and Definition

“Vassily!” he shouts, turning towards the garden. “Vaska! Call Vassily to me!”

The coachman Vassily runs up. He is chewing something and breathing hard.

“Go into the water,” the master orders him. “Help them to pull out that eel-pout. They can’t get him out.”

Vassily rapidly undresses and gets into the water.

“What’s the good of saying that? We know all about that! You get it out!”

But there is no getting it out like this! One must get hold of it by the head.”

“And the head is under the root! We know that, you fool!”

“Now then, don’t talk or you’ll catch it! You dirty cur!”

“Before the master to use such language,” mutters Yefim. “You won’t get him out, lads! He’s fixed himself much too cleverly!”

“Wait a minute, I’ll come directly,” says the master, and he begins hurriedly undressing. “Four fools, and can’t get an eel-pout!”

When he is undressed, Andrey Andreitch gives himself time to cool and gets into the water. But even his interference leads to nothing.

“We must chop the root off,” Lubim decides at last. “Gerassim, go and get an axe! Give me an axe!”

“Don’t chop your fingers off,” says the master, when the blows of the axe on the root under water are heard. “Yefim, get out of this! Stay, I’ll get the eel-pout. . . . You’ll never do it.”

The root is hacked a little. They partly break it off, and Andrey Andreitch, to his immense satisfaction, feels his fingers under the gills of the fish.

The head of a big eel-pout, and behind it its long black body, nearly a yard long, appears on the surface of the water. The fish flaps its tail heavily and tries to tear itself away.

“None of your nonsense, my boy! Fiddlesticks! I’ve got you! Aha!”

A honied smile overspreads all the faces. A minute passes in silent contemplation.

“A famous eel-pout,” mutters Yefim, scratching under his shoulder-blades. “I’ll be bound it weighs ten pounds.”

The fish makes a sudden, unexpected upward movement with its tail and the fishermen hear a loud splash . . . they all put out their hands, but it is too late; they have seen the last of the eel-pout.