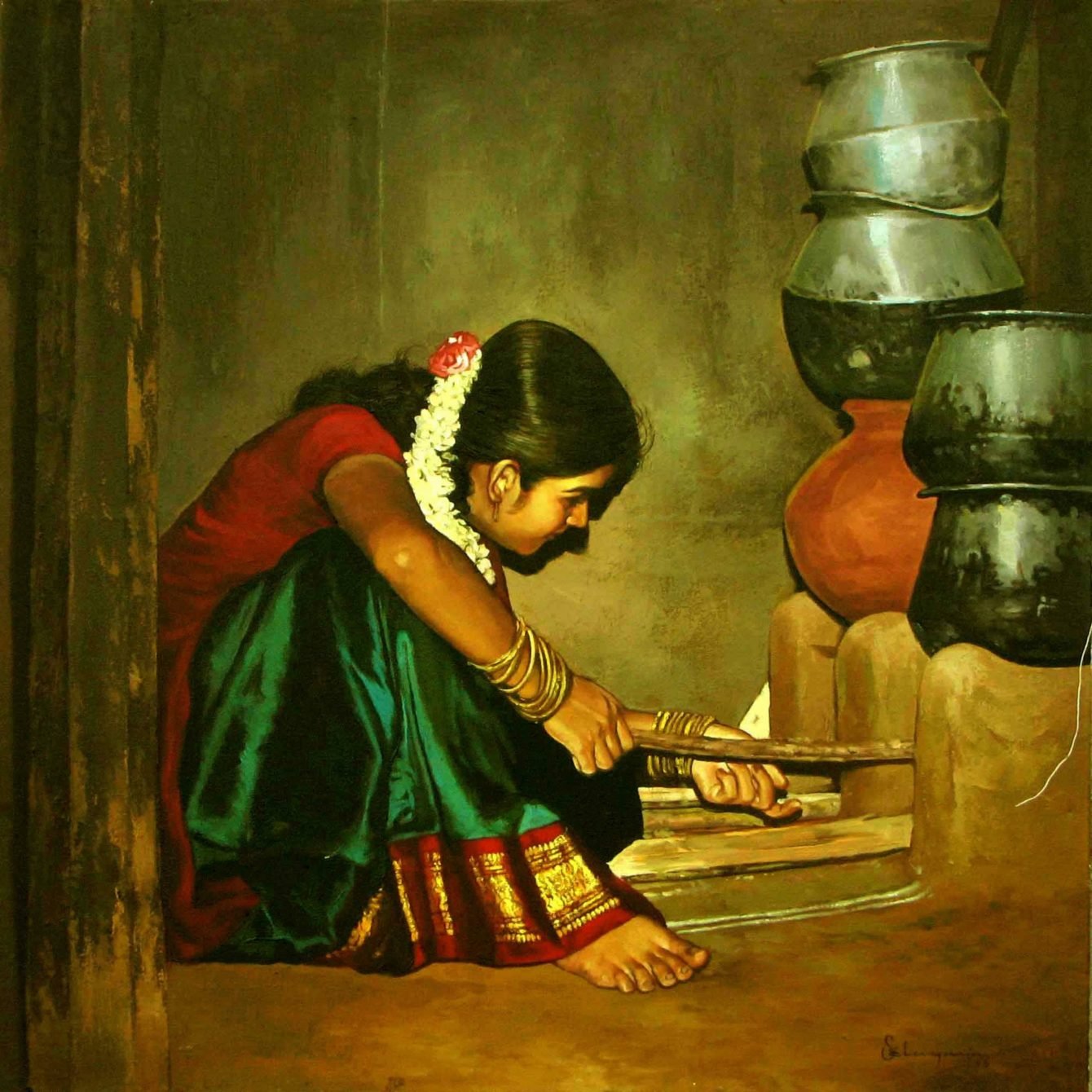 GRISHA, a fat, solemn little person of seven, was standing by the kitchen door listening and peeping through the keyhole. In the kitchen, something extraordinary, and in his opinion never seen before, was taking place. A big, thick-set, red-haired peasant, with a beard, and a drop of perspiration on his nose, wearing a cabman’s full coat, was sitting at the kitchen table on which they chopped the meat and sliced the onions. He was balancing a saucer on the five fingers of his right hand and drinking tea out of it and crunching sugar so loudly that it sent a shiver down Grisha’s back. Aksinya Stepanovna, the old nurse, was sitting on the dirty stool facing him, and she, too, was drinking tea. Her face was grave, though at the same time it beamed with a kind of triumph. Pelageya, the cook, was busy at the stove and was apparently trying to hide her face. And on her face, Grisha saw a regular illumination: it was burning and shifting through every shade of color, beginning with a crimson purple and ending with a deathly white. She was continually catching hold of knives, forks, bits of wood, and rags with trembling hands, moving, grumbling to herself, making a clatter, but in reality doing nothing. She did not once glance at the table at which they were drinking tea, and to the questions put to her by the nurse, she gave jerky, sullen answers without turning her face.

“Help yourself, Danilo Semyonitch,” the nurse urged him hospitably. “Why do you keep on with tea and nothing but tea? You should have a drop of vodka!”

And nurse put before the visitor a bottle of vodka and a wine-glass, while her face wore a very wily expression.

The cabman looked askance at the bottle, then at nurse’s wily face, and his own face assumed an expression no less cunning, as much as to say, “You won’t catch me, you old witch!”

“I don’t drink; please excuse me. Such a weakness does not do in our calling. A man who works at a trade may drink, for he sits at home, but we cabmen are always in view of the public. Aren’t we? If one goes into a pothouse one finds one’s horse gone; if one takes a drop too much it is worse still; before you know where you are you will fall asleep or slip off the box. That’s where it is.”

“And how much do you make a day, Danilo Semyonitch?”

“That’s according. One day you will have a fare for three roubles, and another day you will come back to the yard without a farthing. The days are very different. Nowadays our business is no good. There are lots and lots of cabmen as you know, hay is dear, and folks are paltry nowadays and always contriving to go by tram. And yet, thank God, I have nothing to complain of. I have plenty to eat and good clothes to wear, and . . . we could even provide well for another. . .” (the cabman stole a glance at Pelageya) “if it were to their liking. . . .”

Grisha did not hear what was said further. His mamma came to the door and sent him to the nursery to learn his lessons.

“Go and learn your lesson. It’s not your business to listen here!”

When Grisha reached the nursery, he put “My Own Book” in front of him, but he did not get on with his reading. All that he had just seen and heard aroused a multitude of questions in his mind.

“The cook’s going to be married,” he thought. “Strange — I don’t understand what people get married for. Mamma was married to papa, Cousin Verotchka to Pavel Andreyitch. But one might be married to papa and Pavel Andreyitch after all: they have gold watch-chains and nice suits, their boots are always polished; but to marry that dreadful cabman with a red nose and felt boots. . . . Fi! And why is it nurse wants poor Pelageya to be married?”

When the visitor had gone out of the kitchen, Pelageya appeared and began clearing away. Her agitation still persisted. Her face was red and looked scared. She scarcely touched the floor with the broom, and swept every corner five times over. She lingered for a long time in the room where mamma was sitting. She was evidently oppressed by her isolation, and she was longing to express herself, to share her impressions with some one, to open her heart.

“He’s gone,” she muttered, seeing that mamma would not begin the conversation.

“One can see he is a good man,” said mamma, not taking her eyes off her sewing. “Sober and steady.”

“Don’t be silly; you are not a child. It’s a serious step; you must think it over thoroughly, it’s no use talking nonsense. Do you like him?”

“She should say she doesn’t like him!” thought Grisha.

“Think of something else,” nurse flew out at her from the next room. “He has not reached his fortieth year; and what do you want a young man for? Handsome is as handsome does. . . . Marry him and that’s all about it!”

“I swear I won’t,” squealed Pelageya.

“You are talking nonsense. What sort of rascal do you want? Anyone else would have bowed down to his feet, and you declare you won’t marry him. You want to be always winking at the postmen and tutors. That tutor that used to come to Grishenka, mistress . . . she was never tired of making eyes at him. O-o, the shameless hussy!”

“Have you seen this Danilo before?” mamma asked Pelageya.

“How could I have seen him? I set eyes on him to-day for the first time. Aksinya picked him up and brought him along . . . the accursed devil. . . . And where has he come from for my undoing!”

At dinner, when Pelageya was handing the dishes, everyone looked into her face and teased her about the cabman. She turned fearfully red, and went off into a forced giggle.

“It must be shameful to get married,” thought Grisha. “Terribly shameful.”

All the dishes were too salt, and blood oozed from the half-raw chickens, and, to cap it all, plates and knives kept dropping out of Pelageya’s hands during dinner, as though from a shelf that had given way; but no one said a word of blame to her, as they all understood the state of her feelings. Only once papa flicked his table-napkin angrily and said to mamma:

“What do you want to be getting them all married for? What business is it of yours? Let them get married of themselves if they want to.”

After dinner, neighbouring cooks and maidservants kept flitting into the kitchen, and there was the sound of whispering till late evening. How they had scented out the matchmaking, God knows. When Grisha woke in the night he heard his nurse and the cook whispering together in the nursery. Nurse was talking persuasively, while the cook alternately sobbed and giggled. When he fell asleep after this, Grisha dreamed of Pelageya being carried off by Tchernomor and a witch.

Next day there was a calm. The life of the kitchen went on its accustomed way as though the cabman did not exist. Only from time to time nurse put on her new shawl, assumed a solemn and austere air, and went off somewhere for an hour or two, obviously to conduct negotiations. . . . Pelageya did not see the cabman, and when his name was mentioned she flushed up and cried:

“May he be thrice damned! As though I should be thinking of him! Tfoo!”

In the evening mamma went into the kitchen, while nurse and Pelageya were zealously mincing something, and said:

“You can marry him, of course — that’s your business — but I must tell you, Pelageya, that he cannot live here. . . . You know I don’t like to have anyone sitting in the kitchen. Mind now, remember. . . . And I can’t let you sleep out.”

“Goodness knows! What an idea, mistress!” shrieked the cook. “Why do you keep throwing him up at me? Plague take him! He’s a regular curse, confound him! . . .”

Glancing one Sunday morning into the kitchen, Grisha was struck dumb with amazement. The kitchen was crammed full of people. Here were cooks from the whole courtyard, the porter, two policemen, a non-commissioned officer with good-conduct stripes, and the boy Filka. . . . This Filka was generally hanging about the laundry playing with the dogs; now he was combed and washed and was holding an ikon in a tinfoil setting. Pelageya was standing in the middle of the kitchen in a new cotton dress, with a flower on her head. Beside her stood the cabman. The happy pair were red in the face and perspiring and blinking with embarrassment.

“Well . . . I fancy it is time,” said the non-commissioned officer, after a prolonged silence.

Pelageya’s face worked all over and she began blubbering. . . .

The soldier took a big loaf from the table, stood beside nurse, and began blessing the couple. The cabman went up to the soldier, flopped down on his knees, and gave a smacking kiss on his hand. He did the same before nurse. Pelageya followed him mechanically, and she too bowed down to the ground. At last the outer door was opened, there was a whiff of white mist, and the whole party flocked noisily out of the kitchen into the yard.

“Poor thing, poor thing,” thought Grisha, hearing the sobs of the cook. “Where have they taken her? Why don’t papa and mamma protect her?”

After the wedding, there was singing and concertina-playing in the laundry till late evening. Mamma was cross all the evening because nurse smelt of vodka, and owing to the wedding there was no one to heat the samovar. Pelageya had not come back by the time Grisha went to bed.

“The poor thing is crying somewhere in the dark!” he thought. “While the cabman is saying to her ‘shut up!’ ”

Next morning the cook was in the kitchen again. The cabman came in for a minute. He thanked mamma, and glancing sternly at Pelageya, said:

“Will you look after her, madam? Be a father and a mother to her. And you, too, Aksinya Stepanovna, do not forsake her, see that everything is as it should be . . . without any nonsense. . . . And also, madam, if you would kindly advance me five roubles of her wages. I have got to buy a new horse-collar.”

Again a problem for Grisha: Pelageya was living in freedom, doing as she liked, and not having to account to anyone for her actions, and all at once, for no sort of reason, a stranger turns up, who has somehow acquired rights over her conduct and her property! Grisha was distressed. He longed passionately, almost to tears, to comfort this victim, as he supposed, of man’s injustice. Picking out the very biggest apple in the store-room he stole into the kitchen, slipped it into Pelageya’s hand, and darted headlong away.

According to Their Lights