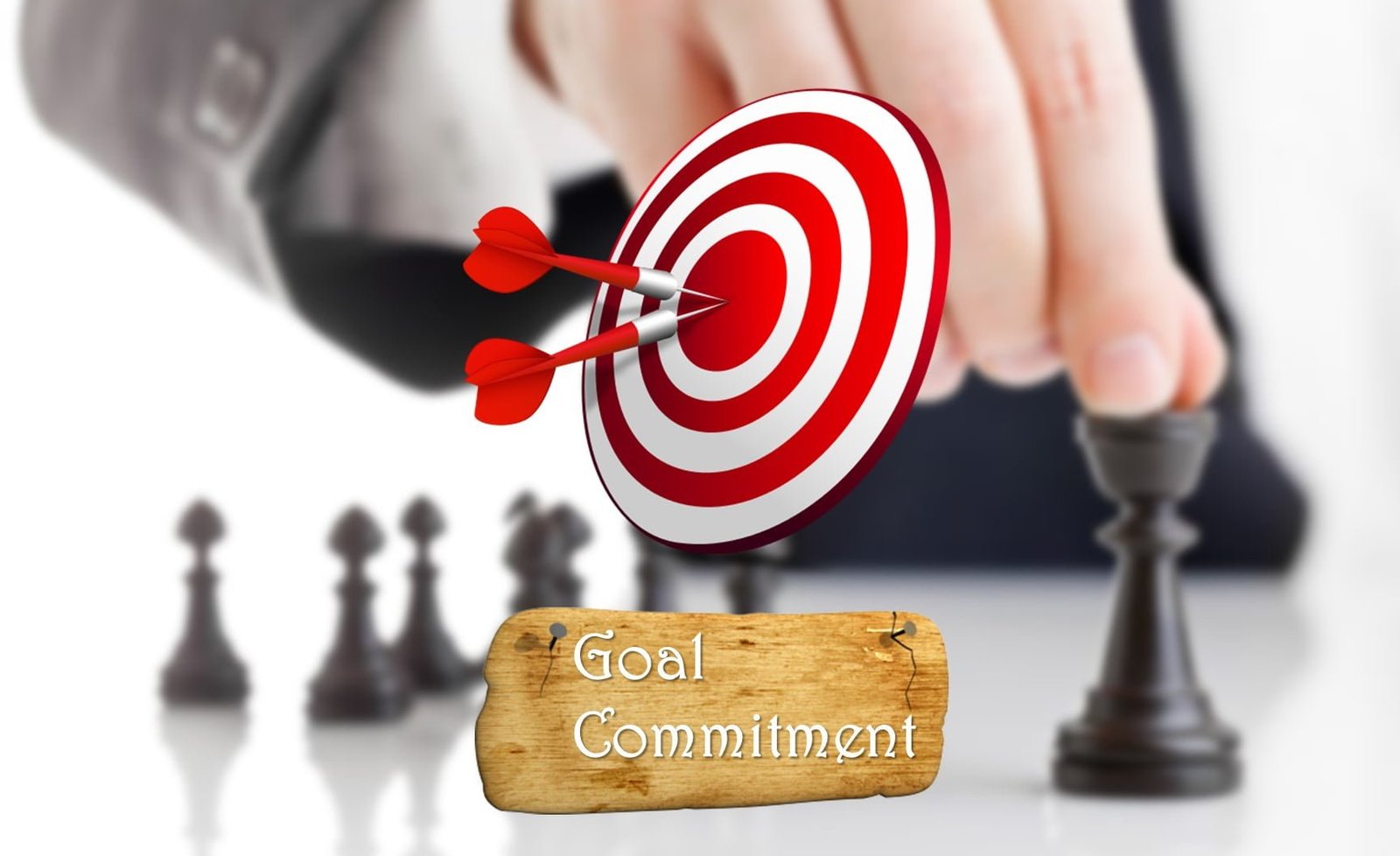 Goal Commitment? What affects the strength of commitment to goals? How does this affect goal attainment? Goal commitment is our determination to pursue a course of action that will lead to the goal we aspire to achieve (Bandura, 1986). The strength of goal commitment will affect how hard one will try to attain the goal. Goal commitment affects by the properties described thus far: difficulty and specificity. For example, when goals are too difficult, commitment declines, followed by a drop-off in performance (Locke & Latham, 1990).

What is Goal Commitment?

Contents:
1. What is Goal Commitment?
1.1. Goal Intensity:
1.2. Goal Participation:
1.3. Peer Influence:
1.3.1. Make sure that your business goals are achievable.
1.3.2. Use specific sentences in your business goals.
1.3.3. Write your business goals on the paper.
1.3.4. Determine the activities that must accomplish.
1.3.5. Assign responsible for each activity.

“Degree to which a person determine in achieving a desired (or required) goal.”

Commitment is related to goal intensity, or the amount of thought or mental effort that goes into formulating a goal and how it will be attained (Locke & Latham, 1990). This is similar to goal clarification because when we clarify a goal; we involve in a conscious process of collecting information about the goal and task and our ability to attain it (Schutz, 1989).

In a study of fifth graders, Henderson (cited in Locke & Latham, 1990) found that students who formulated a greater number of reading purposes with more detail and elaboration attained their goals to a greater extent than did students with superficial purposes. Although there was no difference in IQ scores of the groups; the students who set more goals with elaboration were better readers. It stands to reason that the more thought that gives to developing a goal; the more likely one will commit to the goal.

How important, motivationally, is it for people to participate in goal setting? This is an important question because goals are often assigned by others at home, school, and work. The state imparts curriculum standards or goals to teachers, who in turn impose them on students. A sales manager may assign quotas to individual salespersons. Letting individuals participate in setting goals can lead to greater satisfaction. Nevertheless, telling people to achieve a goal can influence self-efficacy; because it suggests they are capable of achieving the goal (Locke & Latham, 1990).

To investigate the effects of assigned and self-set goals; Schunk (1985) conducted a study of sixth-grade students with LD who were learning subtraction. One group was assigned goals (e.g., “Why don’t you try to do seven pages today”). A second group set goals themselves (e.g., “Decide how many pages you can do today”). A third group worked without goals. Students who self-set goals had the highest self-efficacy and math scores. Both goal groups demonstrated higher levels of self-regulation than the control group without any goals.

How to Explain Techniques of Scientific Management?

Nevertheless, Locke and Latham (1990) concluded that self-set goals are not consistently more effective than assigned goals in increasing performance. The crucial factor in assigned goals is acceptance. Once individuals become involved in a goal, the goal itself becomes more important than how it was set or whether it was imposed. Because, at work and in schools, goals are often assigned by others; the assigned goals must accept by participants. Joint participation in goal setting by teachers and students may increase the acceptance of goals.

One factor where teachers might be influential in promoting goal acceptance and commitment is peer influence. Strong group pressures are likely to increase commitment to goals (Locke & Latham, 1990). This group cohesiveness is more often found on athletic teams. Obviously, the coach wants a strong commitment to the team goals. In the classroom, group goals may aid the commitment of students working in cooperative learning groups and thus lead to a higher quality of work.

An Entrepreneur will need to do if you want to commit towards achievement:

The following achievement below are;

Make sure that your business goals are achievable.

The biggest enemy of achieving business goals is setting up unrealistic goals. For example, if you set the goal to increase sales by 500%; although the growth of the industry is lower than 10%, surely, 500% would be unrealistic.

If you notice that some goal cannot be achieved, simply adjust it in the line with reality. For example, use a 15% increasing in sales instead of 500%. The goal of 15% would be much more realistic, and certainly; it will be as imperative for you and your business to achieve it because it is above-average in the industry.

Use specific sentences in your business goals.

Write your business goals on the paper.

Different scientific researches prove that if you put something on a paper; your commitment to that something is will be higher. In his book Influence; The Psychology of Persuasion, Dr. Robert Cialdini gives an example from the Korean war in which the Chinese soldiers in the camps where he held prisoners (soldiers) were looking for written statements that communism is better than the US system to write on the paper. Thus a long time they were committed to his own statement in which basically they did not believe. If your business goal writes on paper they will be in a group with a higher commitment than the goals that remain only in our head.

Determine the activities that must accomplish.

Knowing the activities that must implement to achieve your business goals in advance will increase the level of commitment to the goal. Therefore, once you have the goal of the paper, list the activities.

Assign responsible for each activity.

At the end of each activity assign responsibility for implementations. In such a way, the commitment will transfer to the employees or your team members; and, at the same time will assure achievement.

Components of a Strategy Statement